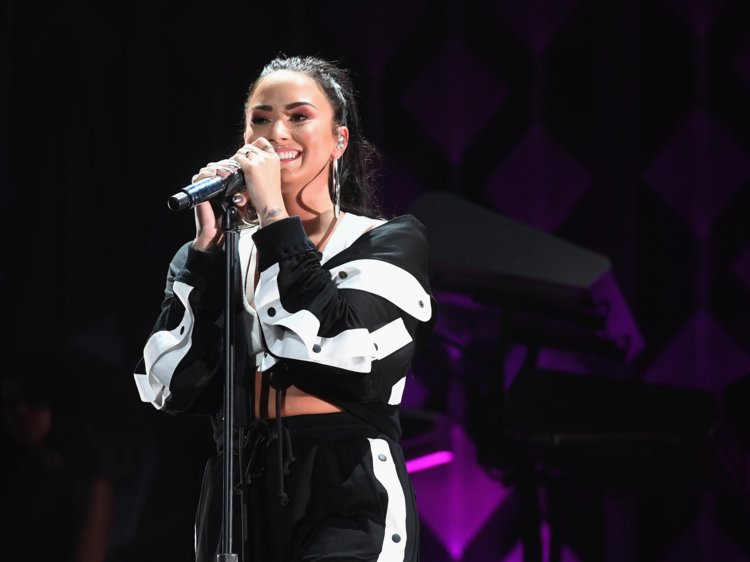 On June 21, Demi Lovato released a new song called "Sober."Lovato's lyrics allude to her alcoholism and imply that she has recently relapsed, despite celebrating six years of sobriety in March."To the ones who never left me / We've been down this road before / I'm so sorry, I'm not sober anymore," she sings.The song could also be about her past.Fans have flooded Twitter with messages of support and are taking the opportunity to stress that, for many, relapse is a part of recovery.She performed the song live for the first time on June 24 and shared a clip on Twitter, writing that she took the stage as "a new person with a new life."

Demi Lovato has been hinting at new music for months; she had previously dubbed the forthcoming single her " most heartbreaking song" and called it her " truth" on more than one occasion.

On Thursday, June 21, Lovato dropped a surprise track called "Sober" and paired it with a lyric video on YouTube. The video opens with a scene that appears to show Lovato's perspective after waking up hungover — then flashing back to a time in her life when she was actively using drugs and drinking alcohol.

"Wake me when the shakes are gone / And the cold sweats disappear / Call me when it's over / And myself has reappeared," she sings. "To the ones who never left me / We've been down this road before / I'm so sorry, I'm not sober anymore."

She also uploaded a clip to Twitter, accompanied by the familiar sentiment: "My truth."

She has offered no further explanation or context. But it seems safe to assume, given her reputation for honesty and openness, that Lovato wrote the revealing song about a recent relapse — despite celebrating six years of sobriety in March.

The revelation comes after a fan accused Lovato of breaking her sobriety in April, when it appeared that the "Sorry Not Sorry" songstress had Photoshopped a drink out of her hand. At the time, Lovato said that it was Red Bull but also added, "I don't have to defend anything."

"Sober" is clearly a meditation on Lovato's feelings of guilt.

In the second verse of "Sober," the former Disney Channel star laments that she wants to be a role model, but she's "only human." Lovato expressed a similar sentiment in an April interview with INSIDER.

"There's definitely pressure. There's pressure to maintain this role as kind of the poster child for recovery," she told INSIDER. "But it also holds me accountable. So it's a blessing. It doesn't feel like a burden by any means but it does help me stay accountable for my actions today."

Indeed, it's clear from the lyrics that Lovato feels a sense of responsibility and guilt following her relapse.

"Momma, I'm so sorry I'm not sober anymore / And daddy, please forgive me for the drinks spilled on the floor," she sings. "And I'm sorry for the fans I lost / Who watched me fall again." At the end of the song, Lovato explicitly promises to "get help."

Lovato said she is " a new person with a new life" after performing the song on June 24.

During a stop on her "Tell Me You Love Me" world tour in Lisbon, Portugal, Lovato appeared emotional as she performed the piano ballad live for the first time.

The singer shared a clip of the performance on Twitter, which sees the crowd showing its support by singing along and lighting up the arena with phone flashlights. When Lovato sang the lyric, "I'm sorry to the fans I lost," the crowd began to cheer and Lovato got audibly choked up.

"Tonight I took the stage, a new person with a new life. Thank you to everyone who has supported me throughout this journey. It will never be forgotten," she wrote.

Lovato also used her Instagram story to debut a new tattoo reading "free" on her finger, which she seems to have gotten the day after the song's release. Fans have rushed to support Lovato and say thank you for being open about her struggles.

Many pointed out the bravery it must have taken to release the song, especially considering Lovato's public embrace of sobriety.

@notearslovatoIt’s so fucking hard to admit a relapse especially to millions of people that look up to you daily. So if any of you are gonna give Demi shit for this, please just leave the fandom now because she needs the real and supportive lovatics in this time 88110:50 AM - Jun 21, 2018Twitter Ads info and privacy

446 people are talking about this

supreme lovatics LOVES DEMI@supremelovatics · Jun 21, 2018Thinking about how many people tell Demi her sobriety saved their lives and how hard it was to release this song bc she’s going to feel like now her fans won’t stay sober and will relapse just bc she did. We need to think about the things we say to Demi, the pressure to be

supreme lovatics LOVES DEMI@supremelovaticsPerfect that some fans put on her. It makes it 10x harder for her to be honest. Get sober and help for yourself and don’t make Demi feel like she’s what’s holding you together. Take the pressure to be perfect off of her. 6911:14 AM - Jun 21, 2018Twitter Ads info and privacy

23 people are talking about this

Some fans who have had similar experiences with addiction and sobriety also expressed gratitude that Lovato is honest about her ups and downs.

dom☽@CMONPUDDlNsober is hitting me so hard not just because of the connection with demi but because of the fact that i relapse with certain things also, i’m forever grateful that demi makes music like this

268 people are talking about this

kels™@kccbv_Demi Lovato’s new song about breaking sobriety hits some deep nerves within myself. Fighting addictions is the HARDEST thing I ever had to face, and it’s such a hard life. But life doesn’t end when we relapse we just try again. #DemiLovatoSober 1510:09 PM - Jun 21, 2018Twitter Ads info and privacy

1,157 people are talking about this

Others took the opportunity to discuss the nature of addiction, reassuring Lovato (and other readers who might be struggling) that, for many, relapse is a part of recovery.

ia af@artisticxlovatorecovery is a daily battle. sobriety is a daily battle. relapse does happen. we are only human. no human can fight and fight and fight everyday to the fullest - everyone has got those days/weeks were we feel weak. but its important to get up and continuing to fight. #sober 8,10111:01 AM - Jun 21, 2018Twitter Ads info and privacy

2,611 people are talking about this

Anthony@iamanthonyxoMy heart hurts so fucking bad for Demi and her relapse. Unfortunately relapsing is apart of recovery sometimes, and those moments aren’t the ones that define you. 1012:51 AM - Jun 22, 2018Twitter Ads info and privacy

𝐥𝐚𝐮𝐫𝐚 | 𝟓@iinfinitelovatoIt breaks my heart that demi thinks relapsing makes her not a role model? Like no! That makes you even more real, relapse is real and it’s natural and it’s a big part of recovery. I’m so fucking lucky that I’ve had you as my role model #sober 1405:44 AM - Jun 22, 2018Twitter Ads info and privacy

55 people are talking about this

"I'm proud of you for having the guts to reveal your truth to the world again. NOT. EASY," the rapper wrote. "I'm here for you friend! (you know this) I pray you'll choose recovery again. All of us who love you only want to see you happy and heathy [sp]."

It's important to note that it's possible Lovato wrote "Sober" about her past.

As the singer has not made any official clarifications since the song was released, it's unclear whether the implied relapse was recent or happened long ago — or even whether it's current.

Given that Lovato has been busy these past few months while on tour in Europe, collaborating with Christina Aguilera, andpromoting various brand deals, it does not appear that fans have noticed any struggles or differences in Lovato's behavior. But she does seem to have recently parted ways with CAST Centers— her former treatment center, which she previously brought on tour to provide group therapy sessions — as it no longer features Lovato on its website as a co-owner.

Indeed, Lovato recently told a fan that the biggest lesson she has learned this year is that "you can't always trust people who you once thought saved you."

Mike Bayer — Lovato's former sobriety "coach," mentor, friend, and business partner at CAST — has not commented on her apparent split from the organization or on her new song.

Nevertheless, Lovato also recently tweeted that she has "grown more in the past two months than I have in years" and that she feels like "a new woman."

Given the dark tone of "Sober," this sentiment is encouraging to say the least. All fans can hope for at the moment is that Lovato is safe and focused on her mental health.