Given the high-stakes game of brinkmanship that he is currently engaged in with Hollywood’s moneymen, it is a good thing that Robert Downey Jr does not really ‘do’ self doubt.

So confident is the 48-year-old actor of his own ability that, in an interview with GQ this month, he says he fully deserves the £33 million he got for his last film — and predicts it is only a matter of time before he wins his first Oscar.

Downey can afford to be cocky. The new undisputed king of Hollywood is a walking, talking multi-billion-dollar business.

As if to illustrate the fact, he is on the verge of pulling off the biggest ever single payday for a star by signing the first $100 million (£65 million) contract in movie history, reprising his role as superhero Iron Man in two more episodes of Disney’s big-screen franchise.

And Downey Jr, who has twice starred as Sherlock Holmes, admits he is now considered not so much an actor but a ‘strategic cost’ to the big money corporations who employ him — and rake in billions from his films.

It has, of course, brought him a suitably enviable lifestyle, which includes his eccentrically decorated Malibu estate overlooking the Pacific, private planes and his own chef.

The extraordinary thing is that, not so long ago, Downey Jr was a poster boy for wasted talent. Broke and in and out of prison because of his self-destructive taste for booze and never-ending quantities of weapons-grade drugs, he was reduced at one point to earning eight cents an hour scrubbing pizza pans in the kitchen of the LA County Jail.

For a period in the 1990s and the early part of the next decade, the actor was considered a pariah and a laughing stock, despite (or perhaps because of) the fact that he had consistently hailed himself as the best actor of his generation after the intensity of his performances, not least in his Oscar-nominated role in the biopic Chaplin in 1992.

One leading director used to enjoy playing party guests the tape of an emergency 911 call by a female neighbour of the actor who came home in May 1996 to find Downey Jr asleep in her 11-year-old son’s empty bed.

Out of his mind on cocaine and drink, he had wandered in, undressed to his underpants, folded his clothes up and settled down to sleep. Comically, the bemused woman’s call to police was accompanied by the sound of the star’s loud snoring.

He was already on parole after being arrested for racing his car drunk along Sunset Boulevard while in possession of a stash of drugs and a .357 magnum revolver — mercifully, unloaded. On another occasion, he was arrested, naked and hallucinating, at the wheel of his Porsche.

At his lowest ebb, he was found in the foetal position in a rat-infested alley behind a dingy LA hotel. During one of a litany of court appearances on drugs charges, he told a judge: ‘Taking drugs to me is like having a shotgun in my mouth with my finger on the trigger, and I like the taste of the gun metal.’ 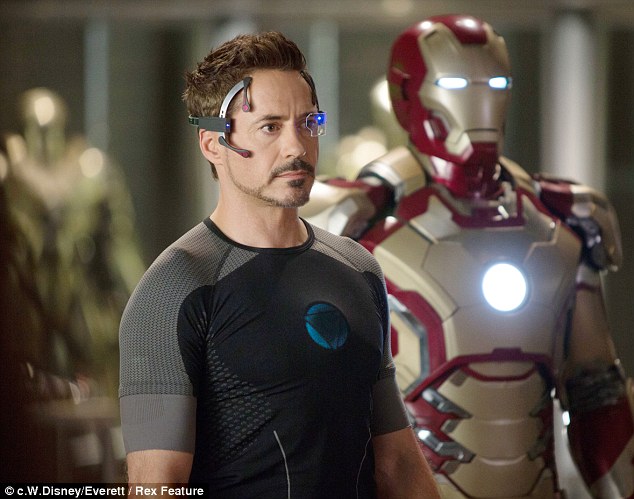 It was a steep descent for Downey Jr, the handsome one-time leading light of Hollywood’s Brat Pack of actors who had won rave reviews for his roles in films such as Natural Born Killers and Short Cuts.

To a large extent, his myriad problems were the legacy of a recklessly liberal upbringing by his parents, underground film-maker Robert Downey and Elsie, his actress mother, in bohemian Greenwich Village, New York.

His father cast his son in his first film, the avant-garde comedy Pound, at the age of five.

But Downey Sr was a notorious drug addict and one day, as he watched the eight-year-old Robert drinking the white wine he had given him, he offered to let him try a cannabis joint.

It was the start of a slippery slope. When his parents, who also have a daughter, Allyson, divorced in the late 1970s, 13-year-old Robert Jr moved to California with his father and enrolled in High School.

Within four years, he had dropped out and returned to Manhattan to study acting. A stint on the long-running television comedy show Saturday Night Live made his name and he soon became catnip to a series of Hollywood leading ladies.

He had flings with Marisa Tomei and Jennifer Jason Leigh, and began dating his first long-term girlfriend Sarah Jessica Parker (who would go on to find fame in Sex And The City) on the set of 1984 film Firstborn. 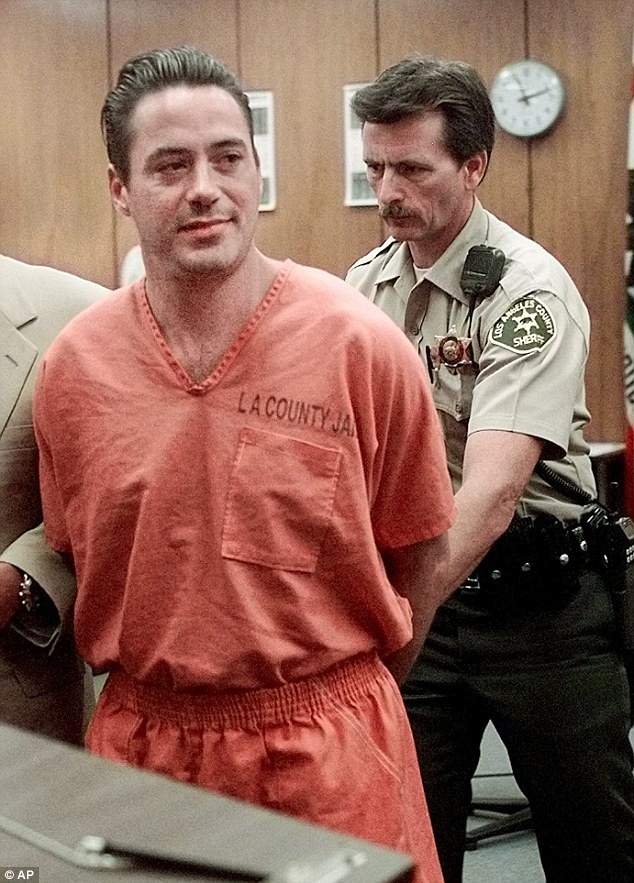 Ex-con: Addiction and recovery is all too familiar territory for the two-time Oscar nominee, whose taste for cocaine and heroin landed him in court-ordered rehab twice

On the rebound and in a haze of drugs, Downey Jr met and married his first wife, actress and musician Deborah Falconer, in the space of 42 days in 1992.

The couple had a son, Indio, now 19, but the responsibilities of being a husband and father did nothing to quell his hell-raising.

Nor did a series of commercial flops, including the 1990 action adventure Air America in which he starred with Mel Gibson, help calm his self-destructive tendencies.

In 1997, Downey Jr was given a 180-day jail sentence in LA for violating probation, but was caught fighting with another inmate. Amid reports he was being targeted by other prisoners, he twice woke up from attacks in a pool of his own blood.

He says of his time in jail: ‘I would never tell you the worst things that have happened to me.’ In 1999, after failing to show up for a court-ordered drugs test, he was sentenced to three years in a state-run substance abuse facility and prison in California. He served 12 months of his sentence before being freed by a judge.

But his reliance on drink and drugs was far from over. On his release in 2000, he was given the part of Calista Flockhart’s boyfriend in the TV legal drama Ally McBeal.

He won a Golden Globe for his performance, but within months he was in trouble again. His room at a hotel in Palm Springs was searched by police, acting on a tip-off, who found methamphetamine and cocaine.

Then, while on parole, Downey Jr was found wandering the streets of LA, barefoot and high as a kite. He was immediately sacked from Ally McBeal and sent back to rehab.

It was the final straw for his wife Deborah, who left him, taking Indio with her, and filed for divorce. Where once he had earned up to £5 million a year, he was now deemed untouchable. To make matters worse, the U.S. taxman came after him and he was left close to bankruptcy. 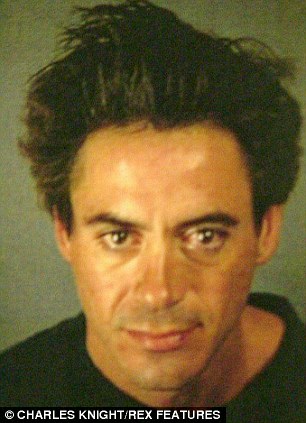 An arrest mugshot of Downey Jnr in 1997 at Malibu, California. The same year he was given a 180-day jail sentence in LA for violating probation

His road to redemption began in 2003 when Mel Gibson cast him in the lead role of the film version of Dennis Potter’s The Singing Detective. Gibson, who was the film’s producer, even had to personally underwrite Downey Jr’s liability insurance because he was deemed too much of a risk.

That same year, Downey Jr met his current wife, producer Susan Levin, on the set of ghost story Gothika. He credits her with turning his life around. Before agreeing to go through with their marriage in August 2005, she insisted that he must finish with drugs for good.

Downey Jr started therapy, entered a 12-step programme, took up meditation, the martial art Wing Chun Kung Fu and described kicking his addictions as like coming out of a ‘20-year coma’. Now he says the strongest thing he consumes is espressos.

Getting clean has done wonders for his film career. In 2008, Downey Jr landed the role of Tony Stark, the alter ego of Marvel Comics superhero Iron Man.

The movie was an instant hit, spawning two sequels and the 2012 spin-off The Avengers, in which he stars with Scarlett Johansson and Gwyneth Paltrow.

As for his huge pay packets, in his interview with GQ this month, Downey Jr not only confirmed he was paid £33 m for his role in The Avengers, but also hinted that his hard bargaining had upset makers Marvel Studios, a subsidiary of Disney.

But as the star of such a successful franchise, he can afford to allow his agents, Creative Artists, to talk tough during negotiations.

The Avengers, which teams Iron Man with a series of fellow comic book superheroes, has taken £1 billion worldwide, making it the third highest grossing film of all time. Meanwhile, Iron Man 3 topped the UK box office on its release last month and has already raked in £500 million. 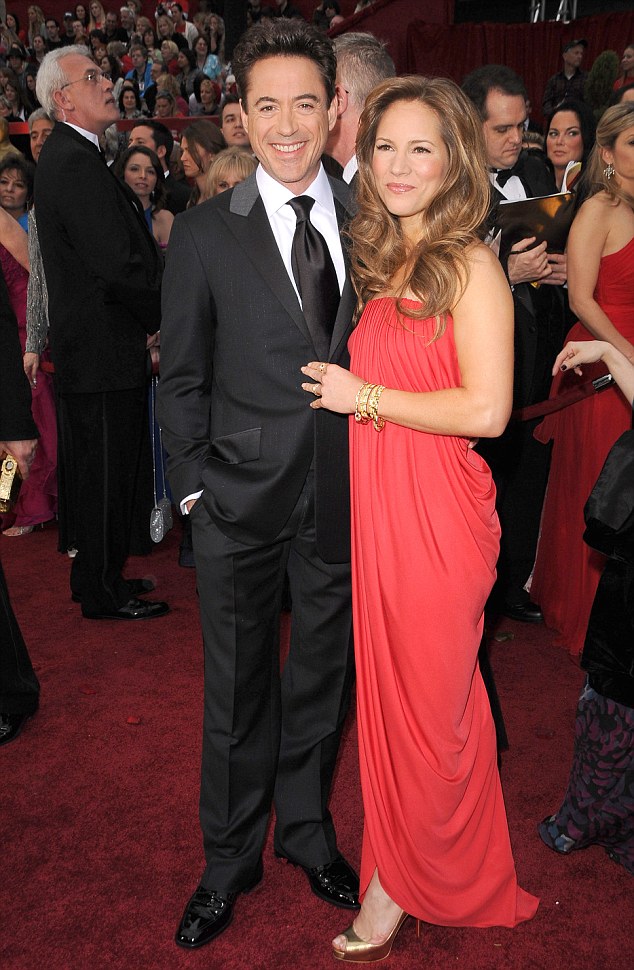 No wonder its makers are so keen to sign up the actor to make two more instalments.

Downey Jr has been hinting in the past few days that he might turn his back on the Iron Man series to spend more time with Miss Levin and their son Exton, who was born in February 2012 — but that could simply be a ruse to ramp up the negotiating pressure.

The film’s producers are saying they won’t be held to ransom — but movie analyst Doug Creutz warns that dropping Downey Jr and casting a new actor could cost them up to $1billion (£650 million). ‘It would be a definite negative for that particular franchise. He is Tony Stark,’ he says.

Meanwhile, Downey Jr is phlegmatic about his stratospheric elevation.

‘I used to say that I’d welcome a bullet to the forehead if I ever ended up as a fortysomething, remarried, marketable, big-action movie dad living in a cosy, cul-de-sac in suburban LA. Now I am that guy!’