Tom held a responsible position at a charity. Friends described him as a kind and caring man. But following the death of his father, he turned to alcohol and lost his job and a close relationship. Living alone, his social circle became dominated by others with alcohol problems. After years of abuse and exploitation, at age 61, he was murdered.

Tom's story is recounted in a new report by the charity Alcohol Change UK. The report highlights how the role of alcohol was missed or poorly managed by support services looking after Tom and other vulnerable people like him.

Older people, like Tom, have the highest rates of alcohol-related harm ever seen, and the effects of this growing problem are taking their toll. Between 2007 and 2017, the number of deaths from alcohol in the UK increased by 21% in people aged over 50, but decreased by 8% in those younger than 50.

The number of hospital admissions for mental disorders, such as dependence and dementia, that resulted from alcohol use show similar differences, with a 7% rise in the over 50 age group compared with an 18% fall in those under 50 over the past four years alone. And there has been a near fourfold increase in the numbers of people over the age of 64 using alcohol treatment services over the past ten years—the highest increase of any age group.

Ageing is difficult. Older people are more likely to have chronic pain and have difficulty with mobility. And they are also more likely to experience bereavement and social isolation. Some people turn to alcohol for help, but this merely introduces a range of additional problems. Drinking alcohol in excess can cause physical problems, such as alcoholic liver disease and changes to the rhythm and structure of the heart. And it can trigger mental disorders, such as anxiety and depression.

It doesn't take long before these physical and mental problems reduce a person's independence and quality of life. But detecting and treating this complex mix of problems can be difficult. People may avoid seeking help because of the stigma of being labelled an "alcoholic." And service providers may have problems with ageism and a lack of training in assessing and intervening in alcohol use disorders and age-related problems. 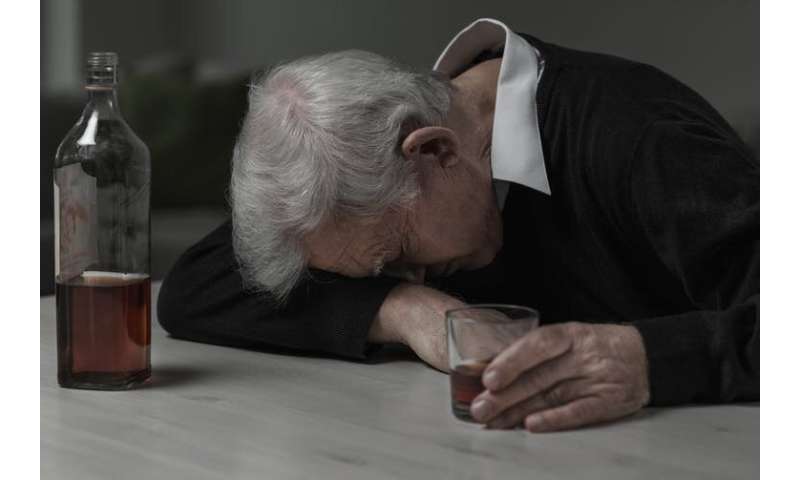 Those with alcohol dependence continue to drink despite being aware that their habit is damaging their health. Heavy drinking is known to impair decision making, but usually this capacity can return. Usually, but not always. For example, alcohol-related brain damage can be irreversible. This damage occurs indirectly through head injury from falls or through damage to the brain's blood vessels from stroke. This can permanently affect a person's capacity for making sound decisions.

In Korsakoff syndrome, memory is affected and damage is largely irreversible, so the capacity to make sound decisions is also permanently impaired. In alcohol-related dementia, damage occurs in the frontal lobes—the part of the brain involved in weighing up information.

Unlike other cognitive impairments caused by alcohol, this can be halted by stopping drinking or the damage can even be partly reversed. But there is still a period when a person with alcohol-related dementia cannot make an informed decision about the harms from drinking and benefits of cutting out alcohol completely. This may be the reason why older people with alcohol-related dementia are less likely to move to controlled drinking or abstinence than those without.

Recent changes in the law designed to reduce the harm done by alcohol will mean health and social care professionals can improve the lives of vulnerable older people by making decisions in their best interests. It is reassuring that those whose lives are blighted by alcohol can now be better supported.

The new legislation, introduced in 2019, places more emphasis on the assessment of capacity than the previous Mental Capacity Act. Other changes include extending the law to people living in their own homes and authorising transport to day centres and other places that reduce access to alcohol and improve social activities. Overall, this will allow mental health and social services to intervene where people with alcohol related mental disorders lack mental capacity to make an informed decision based on their own risk and vulnerability.

As the law now applies to people in their own homes, not just those in hospitals and care homes, we can use these new safeguards to stop people drinking themselves to death. It is a measure to be welcomed and one that is long overdue.