The Case for a Course of Virtual Reality

CROHN'S DISEASE AND THE pain it causes had landed Harmon Clarke in the hospital – again. This time, however, his treatment had a twist: a "flight" over waterfalls in Iceland in a helicopter. "I could almost feel the sun and hear the birds," he says.

A Cedars-Sinai patient recovering from gastrointestinal surgery tries out the virtual reality technique. 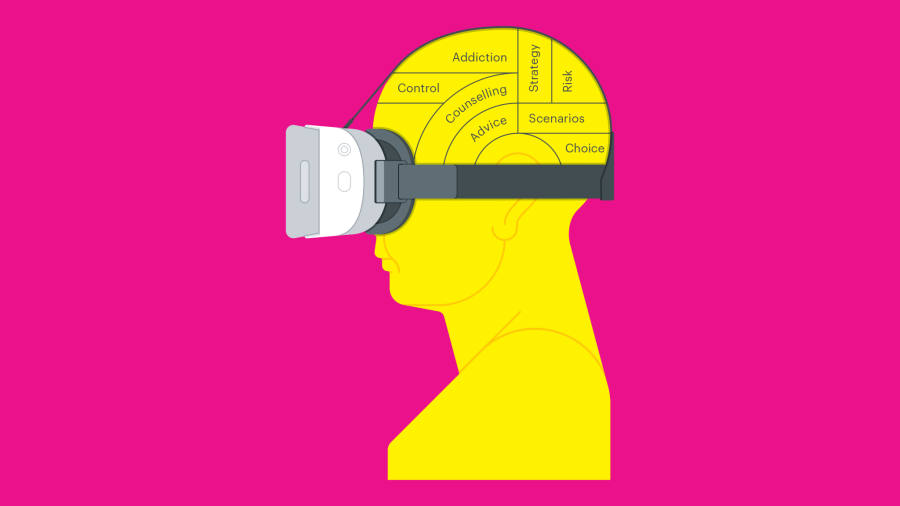 When Clarke was first offered a spot in a clinical trial of virtual reality at Cedars-Sinai Medical Center in Los Angeles, he was skeptical but figured he had little to lose. "They told me it might be able to help me manage my symptoms, feel a bit better and sleep," he says. Indeed, as soon as Clarke put the VR headset on, he says, he felt elation that quickly turned to relaxation. In fact, Clarke, now 35, was so preoccupied by his altered reality that he missed a dose of his pain medication; usually, he was counting down the minutes. During that hospital stay, Clarke continued to use the headset to help him sleep, during IV insertions, and to cope with post-surgical pain. "It didn't take the pain away, but it allowed those moments to be more manageable," he says.

"People think of VR as a gaming technology," says Dr. Brennan Spiegel, director of health services research for Cedars-Sinai, who led the trial. But the computer-generated interactive, immersive worlds typically accessed by a headset and sometimes hand controls are also being used all over medicine. Besides pain management, researchers and clinicians are investigating how VR can be applied to everything from treating phobias to physical rehabilitation.

A review of randomized trials of inpatient VR applications published in 2017 found that the evidence suggests efficacy, but noted the need for larger, vigorous studies to nail down the degree of benefit as well as cost-effectiveness. "It's not like VR has magical properties," cautions Albert "Skip" Rizzo, a research professor and director for Medical Virtual Reality at the University of Southern California's Institute for Creative Technologies. But a growing body of evidence suggests it can improve on or expand access to certain treatments already known to work in the real world, he says.

Reliving trauma – safely. Take exposure therapy, for instance. This technique helps people confront situations they're scared of in the context of therapy, so their anxiety and distress can ease over time. It can be hard to fully replicate those scary situations, whether it's flying in a plane, speaking in front of a big crowd, or reliving a trauma that has contributed to post-traumatic stress disorder, says Barbara Rothbaum, a professor of psychiatry and behavioral sciences at Emory University School of Medicine in Atlanta. VR can make the experience feel realistic, but also keeps it controllable. A therapist can add turbulence to a virtual flight only when the patient is ready for the exposure to intensify, for example.

Finding normal. Exposure therapy enhanced with VR is what finally helped Chris Merkle, a Marine veteran whose multiple tours of Afghanistan and Iraq left him struggling with PTSD. He tried traditional psychotherapy, but found it hard to open up about his experiences, which limited his progress. During a 10-week trial led by Rizzo, he discovered that recreating a traumatic day in Iraq, when his unit took heavy fire while stuck on a two-lane road, was so engaging in virtual reality that it prompted long-forgotten details to pop into his head. It wasn't pleasant to relive the day – but he survived it, over and over again. "It didn't kill me to talk about it. It normalized it," he says. Now he can smell a tire burning after a traffic accident on the highway and recognize it for what it is, rather than feel his stress and anxiety surge. Merkle is now in a clinical psychology doctoral program and works full time at a center for veterans that offers readjustment counseling.

Pain is likely alleviated through different mechanisms – at least three, Spiegel says. There's the distraction component: The VR "overwhelms the brain with visual stimuli and a sense of presence" elsewhere, he says, which can swing the spotlight of attention away from the physical experience of pain. (An offline example: blowing bubbles during kids' vaccinations to distract them from the shot.) An engaging experience can also make time seem to fly by, which reduces the perceived time spent in pain. And the pleasant, immersive experience is thought to block the "gates" in the spinal cord from receiving pain signals.

That can come in handy during labor. A pilot study published recently looked at the pain perceptions of 27 women giving birth for the first time, assigning them to either a period of unmedicated labor followed by a period of unmedicated labor plus VR, or the reverse. Women experienced a scuba diving simulation with manatees, set to relaxation-inducing music, with an option to take virtual photos of the scene using a hand controller, says David Frey, an obstetric anesthesiologist now practicing in Orlando, Florida, and an author of the study, which was conducted at the University of Michigan. Their ratings for pain and anxiety were lower in the VR setting, no matter whether they entered the virtual world at the outset or later, and 82% said they very much or completely enjoyed using the technology during labor.

Anxiety can magnify pain and discomfort, so at Lucile Packard Children's Hospital Stanford, kids use VR to calm down before surgery, during nasal endoscopies and when they're getting casts or sutures removed, for example, says pediatric anesthesiologist Thomas Caruso. Child life specialists meet with the children beforehand to see what kind of content they're interested in – something active, like picking up pebbles, or passive, like watching fish float by. (That choice also gives them autonomy, which is often lost in the hospital.)

Side effects. Kids at Stanford are screened for risk factors that might make VR unsuitable, like a history of seizure disorders, nausea or motion sickness. The most common side effect of VR is "cybersickness," when a disconnect between what the eye is seeing and the inner ear is sensing can cause dizziness, nausea and vertigo, though that's less of a problem as VR technology has improved, Spiegel says. Some people may also be susceptible to the equivalent of a VR bad trip, where the mind feels dissociated from the body, he says.

For those who can participate, VR can also be a motivating force. Many patients in rehab, for example, don't always perform exercises as frequently or with the intensity that's prescribed, says Danielle Levac, assistant professor in the department of physical therapy, movement and rehabilitation sciences at Northeastern University and director of the rehabilitation games and virtual reality lab. A VR scene that lets the patient virtually ski, say, shifting weight from foot to foot and losing points for missing a gate, can make it more entertaining to use, potentially leading to better results and a quicker recovery, she says. Rehab is also about learning new skills, and VR helps there, too; the idea is that the more engaged and motivated people are, the more enhanced their learning, possibly by better consolidating memories.

VR can be used to engage patients in other ways, too. At Lucile Packard, parents of kids with congenital heart defects can put on a headset and explore a virtual heart from the inside out. Chronic pain patients like Clarke can use VR to learn real-world coping or relaxation techniques such as yoga. That's what Clarke did after leaving the hospital, and he's now a certified instructor.