What to Do When OCD Means Intrusive, Unwanted Thoughts

WE ALL HAVE THOUGHTS.

You’re standing at the edge of a subway platform. Your ride is approaching through the tunnel – and perhaps you think, for the slightest instant, how easy it would be to jump in front of the moving train. 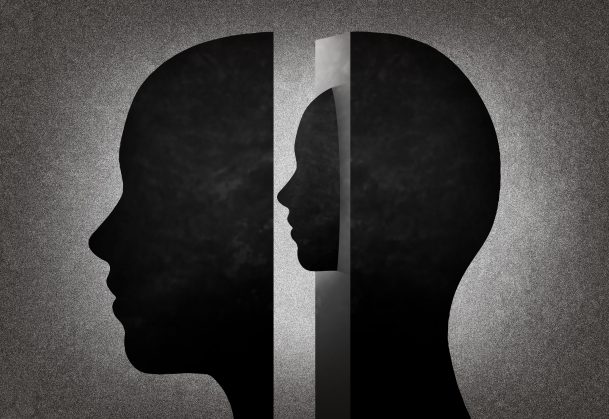 Or to push the person next to you into its path.

Horrific as it sounds, you needn’t be suicidal or homicidal to have such a fleeting thought. “I always have an automatic thought that pops into my head of me shoving somebody or jumping onto the tracks” when standing on the subway platform in Boston, says Carol Hevia, a behavior therapist at the Obsessive Compulsive Disorder Institute at McLean Hospital in Belmont, Massachusetts. “Now, have I ever jumped onto the tracks or shoved anybody? … No. The train pulls up, I get on and I go on with my day.”

If it weren’t for the fact that she works with some patients who have obsessive-compulsive disorder who also struggle with anxiety-provoking, reoccurring intrusive thoughts, Hevia says she probably wouldn’t even notice that she had the fleeting thoughts to begin with. For most, such thoughts dissipate as quickly as they materialize, apart from perhaps triggering idle curiosity: Where did that come from? But for some people with OCD, troubling thoughts become obsessions.

In the classic example of OCD, a person might engage a compulsion like washing one’s hands innumerable times in a day in reaction to obsessive concerns about getting seriously ill from germ exposure. But for those with OCD who have reoccurring, intrusive thoughts – from fear that one might be a pedophile to concern about hurting a loved one – the exercise to quell deep anxieties about the thoughts is often purely, or primarily, mental. This makes what’s frequently referred to as the Pure O, or pure obsessional OCD, which affects perhaps one-quarter to one-third of all people with OCD, based on expert figures – difficult to spot and treat.

Aaron Harvey, who runs a digital agency that does marketing and creative work in New York City, founded IntrusiveThoughts.org, an educational resource that seeks to humanize the experience of OCD, and Pure O in particular, after spending two decades in the dark about his own deep struggles with intrusive thought obsessions. Now 36, he can remember as a teen and then an adult having “fear and anxiety around things related to whether I was a pedophile, whether I was gay or straight, whether I would harm myself, commit suicide, murder my ex,” Harvey says.

The thing is, those with OCD who have intrusive thoughts aren’t actually more likely to commit associated acts or live out the thoughts, say experts familiar with intrusive thoughts related to OCD. But they worry incessantly they could. “The person has a thought that they would intentionally harm someone, when they would never do that in a million years,” Hevia says. However, in trying to reassure oneself of that and alleviate associated anxiety, a person with OCD may instead spend hours daily fixating all the more intensely on the obsessions.

“First is the idea that the thought, in and of itself, is deviant and signifies something horrible about the person who has it. ‘I must be a sick, mentally unstable person to have had this thought occur.’ Or, ‘Only a ‘bad’ person could think such a thing,” writes Steve Phillipson, a psychologist specializing in OCD and clinical director for the Center for Cognitive Behavioral Psychotherapy in Midtown Manhattan, who coined the term Pure O in 1989. “The second part is the great emotional and physical discomfort accompanying the intrusive idea.

The symptoms of anxiety can include, but are not limited to: rapid and heavy heartbeat, upset stomach, excessive perspiration, muscle fatigue, mental thoughts and/or muscular tension.” These symptoms are what make people with OCD “feel” that the intrusive thought or question – or what Phillipson calls a “spike” – is so problematic, he explains.

Pure O isn’t a classification in the American Psychiatric Association’s Diagnostic and Statistical Manual of Mental Disorders. Rather, the DSM-5 recognizes the capacity for patients with OCD to engage in what are referred to technically as non-observable rituals, Phillipson says.

In fact, though it’s labeled as purely obsessional in an effort to better highlight the crux of what many patients are going through, Phillipson notes, “There’s an escape response in all forms of OCD.” In other words, there are rituals that those with OCD who struggle with intrusive thoughts perform, though not so obvious as compulsive handwashing. “In today’s day and age, probably the most common ritual that a person performs is going online to research whether or not people having these thoughts is problematic,” Phillipson says. Googling troubling subject matter is typically not a good idea, experts say, as it frequently only deepens the concerns a person might have; and neither does simply trying to work things out in one’s own mind help.

A better way, experts say, is to seek treatment that’s proven effective for OCD. “The gold standard in treating all forms of OCD is called exposure and response prevention. It’s a treatment that involves having patients voluntarily conjure up the very associated topics that their brain is offering to them as a warning,” Phillipson says. “The important thing isn’t that these exposure exercises demonstrate that these thoughts are not dangerous, but it really demonstrates that the thoughts and associations are irrelevant.”

There are many ways this type of habituation might be achieved using ERP, a form of cognitive behavioral therapy. For Harvey, who was diagnosed with OCD several years ago and has undergone ERP as part of his treatment, it includes leaving kitchen knives out in his home – instead of avoiding preparing food with others around because of intrusive thoughts that he might hurt family or friends. For a person with a fear of performing a hit and run, it may be driving in the car and getting used to the sound of sticks and rocks under tires, Hevia says. In other cases, it might simply be jotting the thought down in a notebook as a reminder to bring it to mind throughout the day – purposefully.

The idea, Hevia explains, is to reduce sensitivity or heightened reaction to the thought, so that it’s treated more like any other mundane blip in the brain. “We just let the thought come in, and then we let it pass out,” she says. It’s not about trying, in an intellectual way, to rationalize that you’re not going to act on the thought, adds Bruce Mansbridge, a psychologist in Austin, Texas, who specializes in the treatment of obsessive compulsive disorder. Such attempts at self-reassurance only perpetuate the cycle and the worry about the thought, he says.

Another preferable treatment approach involves increasing patient’s overall mindfulness. “We are helping them to stay in the present, and allowing the thought – the thing that’s bothering them – to remain without their reacting to it as, ‘This is terrible, this is horrible,’” Hevia explains.

Medications – such as selective serotonin reuptake inhibitors, or SSRIs, like Prozac, that are used for depression – may also be used to treat anxiety, and a combination of therapy and medication may be used as well. Though the approach differs by the individual, experts say it’s critically important that patients – even if reluctant to do so – are open with mental health professionals about the intrusive thoughts they’re having. A proper diagnosis of OCD is critically important to ensure effective treatment; both those who struggle with intrusive thoughts and OCD and mental health professionals experienced in treating it say patients need to advocate for themselves if their diagnosis or treatment don’t seem to match the issues they face.

Harvey says he’s still learning to live with intrusive thoughts, but has progressed with ERP and a mindful approach as well as medications and calming body-mind activities, such as yoga, meditation and surfing (when in Los Angeles for work). “Everything is a daily challenge, everything is a daily struggle. But it’s trying to make lifestyle choices that can help me be more free and independent from this type of behavior,” says Harvey, who has previously turned to self-medicating with alcohol and drugs and cutting himself to deal with intrusive thoughts. He now tries to share his experience and information on OCD and intrusive thoughts, so that others can get help and better advocate for themselves.

He's worked to shift toward mindfulness, and away from wrestling with intrusive thoughts. “It’s just taking a step back,” he says. “‘I had that thought, I’m going to let it go.’”